Is Kingsman the most conservative comedy this century?

Contemptuous of women and the working class, with an environmentalist baddie and an establishment hero, this James Bond pastiche is a throwback in more ways than one 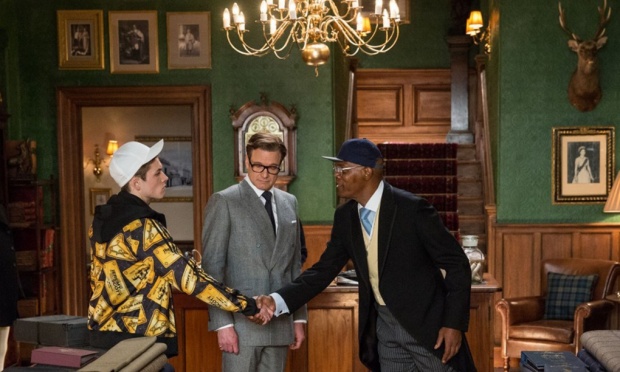 ‘In thrall to the establishment’ … Taron Egerton, Colin Firth, and Samuel L Jackson in Kingsman: The Secret Service. Photograph: Rex

World leaders have been exploding a lot lately. In December North Korea brought Sony Pictures to its knees over their planned release of The Interview, a film that notoriously ends with Kim Jong-un’s head detonating when hit by a tank shell. Kingsman: The Secret Service concludes in similar fashion, but on this occasion the exploding head belongs not to a brutal dictator but the world’s most famous liberal politician. The scene, which takes place during a lavish montage of expiring dignitaries, acts as a grisly exclamation point at the end of one of the most sustained acts of right-wing film-making since its jingoistic 1980s action heyday.

Kingsman is the fifth feature-length effort from producer-turned-director Matthew Vaughn, whose filmography also includes Layer Cake, Kick-Ass, X-Men: First Class and a 2008 short film used as a party political broadcast for the Conservatives. Adapted from Mark Millar and Dave Gibbons’ comic book series The Secret Service – although given its prevailing interests it could have conceivably been based on a couple of old copies of FHM found in the woods – the film follows the talented but unvarnished youth Eggsy (Taron Egerton) as he vies to join the titular covert organisation, while being mentored by the agency’s top spy Harry Hart (Colin Firth). Mark Millar on Kingsman: 'I was seeing so many demonised housing estate characters'

Despite stealing much of its plot wholesale from Men in Black, Kingsman is a James Bond pastiche in its bones, teeming with quips, easily dispatched henchmen and umbrella-derived weaponry. Most crucial to completing the 007 look is a megalomanic villain, who takes the form here of Samuel L Jackson’s Richmond Valentine. A genius tech entrepreneur with a fondness for McDonald’s and limbless sidekicks, Valentine plans to use malevolent SIM cards to force most of the world’s population to violently kill each other, leaving only a select few to inhabit the Earth. The problem with this, other than it being ridiculous and making absolutely no sense, is his motivation. Rather than pursuing money, power, or any other capitalist goal traditionally desired by supervillains, his monstrous strategy is an attempt to halt global warming.

That last point demands to be repeated: the world-threatening villain of Kingsman is a climate change activist.

In the film’s most mortifying attempt at being self-referential, Hart and Valentine have a tense dinner together, with Hart expressing his distaste for modern Bond films, declaring: “Give me a far-fetched theatrical plot any day.” The depiction of Valentine’s plan as a throwback to a less serious era of spy movies is revealed as a feint, with the ulterior motive of undermining environmentalists: not only is the character amoral and dispassionate, but his methods are buffoonish, the doomed-to-fail scheme of a lisping, squeamish eccentric.

Everything about Kingsman exists to disguise the fact that it is solidly conservative – even the theme song is by Take That, presumably recorded as part of some elaborate tax-avoidance scheme. If the film is a throwback, then it’s a throwback in the worst manner: not a carefree romp, but James Bond shooing away a female masseuse with a smack on the bottom, telling her it’s time for “man talk”. It is an unpleasant, carelessly violent cartoon, in thrall to the establishment and utterly contemptuous of women and the working class. League of gentlemen: Kingsman and Britain’s posh-boy spies

The extent of Kingsman’s troubling moral viewpoint is matched only by the determination of reviewers to overlook it. “Just try not to think too much,” suggests Time Out. This curiously disengaged sentiment runs throughout a surprising number of the film’s overwhelmingly positive reviews. Call it the Blurred Lines defence, where the unsavoury message of a work of popular entertainment doesn’t matter so long as it’s catchy. And in filmic terms, Kingsman is catchy: the action is well staged and attractively shot, Firth is an engaging presence as ever, and the whole thing thrums along at a steady clip. Vaughn is an undeniably talented director, but he is also a deeply reactionary one, a fact mostly ignored in light of his enjoyable, seemingly flippant output. Samuel L Jackson: ‘I create characters – it keeps me from being me all day’

Is it meaningful that Kingsman’s genocidal villain is an environmentalist, or that it features a leering, lengthy scene involving the brutal massacre of dozens of innocent people, or another scene in which Taron Egerton’s hero will rescue an imprisoned woman he doesn’t know only if she agrees to kiss him, or that most of the working-class people it depicts are violent layabouts, or that it ends by killing the most notable left-wing political figure in modern history, who is shown earlier to support the antagonist’s plan to decimate the Earth’s population? Yes. These things are very meaningful: just because a film acts as if it doesn’t take itself seriously isn’t an indication that this is the case. Kingsman is the cinematic equivalent of Nigel Farage, hiding its unpalatable political convictions beneath a studied affectation of cheerful irreverence. It may as well be holding a pint, in tweeds, grinning with just its mouth. By Jason Ward.....