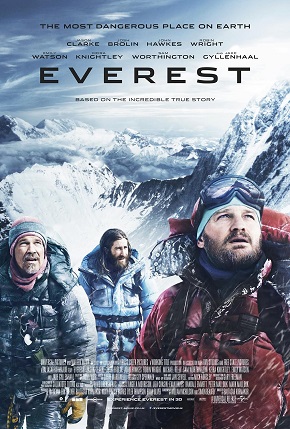 Everest is a beautifully shot movie that showcases the imposing and gigantic mountain, but the movie is not about the mountain. What makes Everest intriguing is the story of the group of people that join up to conquer the mountain. Based on a true story of two expedition groups that lead a dangerous attempt to get to the top of Mount Everest in 1996. The two groups were lead by Rob Hall (Jason Clarke), and Scott Fischer (Jake Gyllenhaal). Two leaders with two very different approaches. Hall being the cautious and calculated, while Fischer was rebellious and persistent. Hall’s group on men consisted of everyday folks who aren’t professional mountain climbers. Fischer’s group consists of seemingly veteran mountain junkies. The parallels between the two men are vividly distinguishable appearance (Fischer is like a mountain hobo) and personality wise. 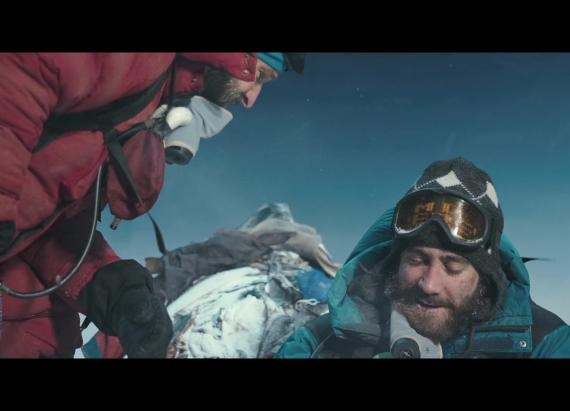 The trek to the top of Everest is documented scene by scene. Director Baltasar Kormakur does a really great job of bringing the viewer along on this journey with these two groups. You will know the elevations they embark on, not only as it’s listed on-screen in subtitles, but the groups stop at numerous resting stations along the way to the top. Some of the featured members of the group are Doug Hansen (John Hawkes) and Beck Weathers (Josh Brolin). Upon encountering a life threatening moment crossing a bridge (one of the best and cringing shots of the film) he reveals to Hall that he pain over $60,000 to do this hike. Hansen on the other hand is someone who had to have donations and sponsors helping to get him there, for a consecutive attempt at Everest. What is most endearing about the film is Rob Hall’s relationship with these men and women. He is incredibly patient, but also extremely compassionate and understanding of everyones goals. The core of the movie are the interactions between this band of brothers and sisters. Everyone could use a guy like Rob in their lives.

There is no doubt that Everest is one of most picturesque films of the year. Cinematographer Salvatore Totino does a masterful job showcasing the wonder that is Everest, but also it’s surroundings. That mountain is genuinely scary to even look at, much less climb. There is a variety of shots that give you the sense of the depth perception. When the groups are crossing over a mountain on a sideways held ladder, it gave me real chills and goosebumps watching that. The movie really looks like something out of the National Geographic, crisp, clean, and beautiful visuals of imposing nature.

Everest is one of those films where it boasts an incredibly talented cast, but no one is the true lead or star. It’s really ensamble at it’s finest, even though if you were to nitpick a lead it would go to Jason Clarke as Rob Hall. Clark does on of his finest work in this film. A really nice role for a very talented guy who has gotten the attention of Hollywood. It was fun to see Josh Brolin play a proud Texan that seems oddly in place with this worldly crew. John Hawkes plays the shy guy, you root for him to make it to the top, an underdog if there is one in the movie. Although his role is more of a supporting kind, Jake Gyllenhaal keeps knocking out every role he has taken the past couple years. Fischer seemed to have been an odd goofball that garnered respect for his fearless and rebellious attitude. Not to be omitted, Keira Knightley is really good as Hall’s wife. She lets you feel and see what a family member goes through when their loved one is attempting to top the mountain.

Visually stunning, Everest is a terrifying movie. I couldn’t help but notice that the majority of the IMAX theater (a must see venue for this film) was covering their eyes and mouths throughout the movie. It will be difficult not to have a tense and nervy feelings while watching. Lots of gasps as the audience watched the climax unraveling. The movie gave is hard to watch at times, it’s sad and scary. 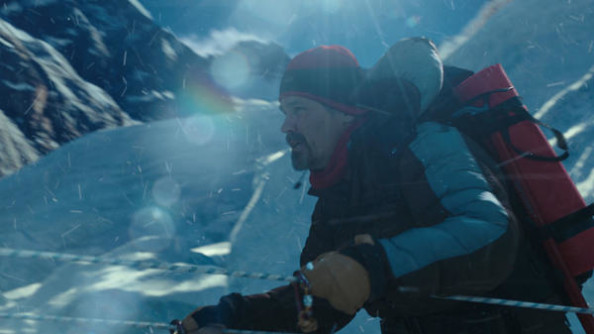 I was hoping the movie would elaborate much more as to why these common folks were paying their life’s earnings to take part in this, and the answers never came. This question was teased during the movie, but there were no concrete individual answers provided. I sort of feel the director was teasing the audience with no concrete reasons and answers being gives as to why do this? I sure would not put myself anywhere near the vicinity of Everest. Those same moments that make you cringe and intimidate, are the same that make you appreciate what you are seeing. I sure as hell would never want to do this battle against Everest. I call it a battle as it’s mentioned in the film that 1 in 4 die attempting to clim this beast. So why do it?!

As frigid as the setting was portrayed, I wish they had more focus on the cold. It could have answered a lot of questions regarding the real science of what kind of immense factor did temperature play in this expedition. One omission the movie had was not mentioning what sort of mission to Everest this was. It was fairly evident they did little actual mountain climbing, it was more of a hike and march. That’s important, Some of these important questions were dismissed in the movie.

Overall, Everest is a visually stunning piece of work. The filmmakers do a great job making you feel like you are there with the group every step of the way through their journey. I was conflicted as to whether respect these people following their dreams and doing something so rare, yet senselessly life threatening. Ultimately it’s the relationships that carry this movie, rightfully so, it’s the most relatable thing about the setting. It’s about personal challenges and setting out to accomplish a sense of pride and purpose in ones life. Everest has a little bit of everything in it. Chills, thrills, sorrow, joy, and awe inspiring visuals. This mountain might be impossible to conquer, but coming along and looking back at this amazing story and the journey these people had is memorable. A true story worth getting to know.