The Music industry and the Blockchain with Ceek VR 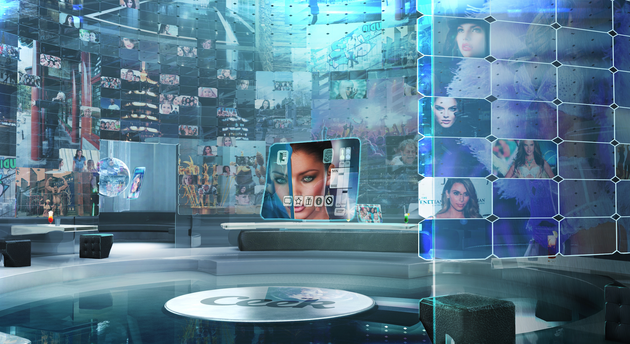 Music industry revenue continues to shift from physical and digital sales to streaming revenues and VR represents the highest level of engagement and revenue opportunity for interactive music streaming. Live festivals and concerts continue to domenate the global music spend with up to 49% attending live shows, concerts and festivasl across the world. Ceek VR are providing new and exciting revenue streams for labels, artists, publishers, etc, and if you think about this carefully people have the opportunity to see their chosen artists LIVE with out the disappointment of not receiving a ticket or to the point the artist is not providing a show in your country, and unable to attend.

CEEK VR established in 2015, is an award winning developer of premium social virtual and augmented reality experiences. Headquartered in Miami Beach, Florida the mission is to make virtual reality experiences universally accessible and enjoyable. CEEK simulates the communal experience of attending a live concert, being in a classroom, attending a sporting event and other ‘money can’t buy’ exclusive experiences with friends from anywhere at anytime. CEEK is now embarking on a new era looking towards the blockchain technology to accelerate growth. Even big multinationals and banks are working on their own blockchain projects, looking to maximize the technology’s capabilities.

To recieve the top bonus for the private / pre-sale starting 5th enter the code below. 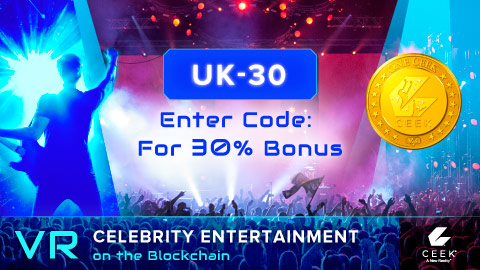 Why the music industry needs Blockchain ?

While music lovers have hailed as the democracy of the music industry, the 15.7 billion global music industry remains the same. Music piracy through illegally downloaded, copied and shared content eats into the artist’s royalties and music labels revenues worldwide. Added to this, the lack of a robust rights management system, which leads to loss of revenue to the artist. And the revenue, by the time the revenue's  reach the artist, this can take up to two years! Another area of concern is unpaid royalties, which are often suspended in various stages due to missing information or with rights ownership. Also their is a lack of access to real-time digital sales data, which if was available this can be used to strategise marketing & PR campaigns in a more positive way.

Artists are also plagued by a lack of sales transparency where  Digital Service Providers (DSPs) report a huge volume of streaming transactions, they end up receiving payment for only 20 to 40 percent of these transactions. This has led to several artists choosing to keep their music off such on-demand streaming services, causing huge gaps in the libraries of popular services like Spotify, Tidal, Apple Music, and Google.

These very areas are where Blockchain can make a difference. As a publicly assessable and decentralised database that is distributed across the internet, Blockchain maintains permanent and undeletable records in cryptographic form. Transactions occur across a peer-to-peer network, and are computed, verified and recorded using an automated consensus method, eliminating the need for an intermediator or third party to manage or control information. The very architecture of Blockchain being immutable, distributed and peer-to-peer brings immense potential to deal with the present woes affecting the music industry.

A recent quote from Nick Mason of Pink Floyd, when he says '' If Blockchain technology is going to be the future, we need to dig in and make it happen''.

A major area in which Blockchain can bring positive change is in the creation of a digital rights database. Digital rights expression is one of the main issues in today’s music industry. Identifying copyright of a song and defining how royalties should be split between songwriters, performers, publishers and producers is extremly difficult in the digital space. Often artists lose out on royalties due to complicated copyright environment. Blockchain’s immutable distributed ledger system, which ensure that no single entity can claim ownership, provides the perfect solution. Secure files with all relevant information such as composition, lyrics, linear notes, cover art, licensing, etc., this can be encoded onto the Blockchain creating a permanent and inerasable record.

As a VR platform that targets the entertainment industry and also founded in 2015, Ceek enables artists to create VR experiences for their fans and audiences. It has already worked with several industry giants and headlining acts to power VR events through their hardware and software.

Ceek will also be using its own token to power its “entertainment metaverse.” The user can spend their tokens on Ceek’s Virtual Mint that would allow them to create their own virtual tokens, which can be then used as tickets to VR events and virtual items that could be traded as merchandise. Ceek will be running its own protocol, which is claimed to be cheaper to use compared to other blockchain platforms in the market today.

Currently the company is working on a VR event destination using blockchain technology, www.ceek.io  which will also provide artists and acts easy access to the blockchain functionalities such as token and virtual merchandise creation. To accelerate that development, Ceek is set to run its token event through December 2017 and will provide the public sale through January / February 2018.